As I prepared to publish a different post, today, I noticed the last one I posted, Tell me, please. Most people are honest, aren't they? and am compelled to  reveal the outcome of the search for the lost (stolen?) books before I go on. I publish this explanation with joy—that my faith in humanity is restored, and chagrin—at having to admit that I, and I alone, am the guilty party.

The explanation may relate to my next post: Confessing and Accepting my Chaotic Mind, but, long story short, after giving up on ever finding them again, and seeking to replace the lost items, I found them, just in time to stop the order for replacements. Where did I find them? The answer, as is the case almost every time I lose anything, is—exactly where I put them. (The box of discs for the audio books in a basket of props covered with two tablecloths and the books I purchased for birthday gifts, on a cluttered shelf in my office underneath an old magazine.)

My apologies to the world for thinking the worst when I should have known the truth from my life-long experience with a forgetful and dissociative mind.

Posted by Janet Muirhead Hill at 12:22 PM No comments:

Tell me, please. Most people are honest, aren't they?

Because I find it so hard to believe that anyone, especially in the small and lovely town of Ennis, Montana, would deliberately steal an item out of the back of a car, it has taken me this long to admit that someone did. The compact disks for eighteen audio books for the late Joan Bochmann's novel Absaroka, mentioned in my previous post, were indeed lifted from the trunk of my car as we were loading up from the authors' sale at the Madison Valley Arts Festival on August 8. 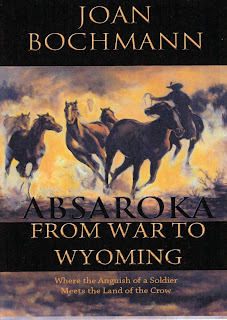 After searching thoroughly, asking others and at the bank, (on whose lawn the event was held) and running a want ad in the lost and found section of the paper, I’ve finally accepted the only possible explanation, someone walked by, lifted the box (and a bag of a half dozen or so books that I’d purchased from other authors at the event) from the trunk of my car as they went by. Why? I’ll never know. I suppose the open maw was inviting and the only two things in the car small enough to take in a hurry were carried off. I just couldn't think why anyone would want a box of 72 CDs (eighteen audio books without cases or covers) and so was very reluctant to believe it, although there was no other explanation. 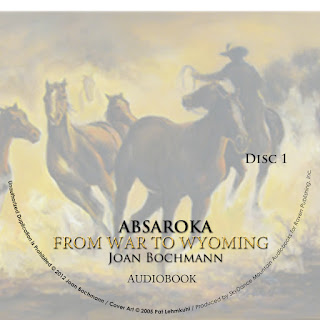 When I finally realized that the books I bought for gifts were missing, too, I had to admit that someone intentionally stole them. Perhaps, on seeing what was in the box, the disappointed thieves dropped it in a trash receptacle somewhere. For if it had been found, it would have come back to me, as the shipping label was still on it. And most people are honest, right?

I'd like to believe that the thieves would sort through and find disks 1 through 4 of this book and listen to the velvet voice of Scott Tanner as he reads Joan's awesome story, and I hope they at least read the books they stole, but, it's hard for me to believe readers could also be thieves—the novel The Book Thief (one of my favorites) not withstanding. It’s disheartening to think of the kinds of people who would do this, but I’ve learned a lesson about trust.

Or have I? I've learned to lock my car when I have something of value inside. And next time, I might close the trunk between loads, though it would be considerably less convenient. But I still desperately want to believe that most people are honest and respectful of others' rights and property. Please tell me that this is true.

Dedicated to my mother 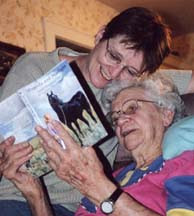 Janet Muirhead Hill
Norris, MT, United States
Born and raised in the Yampa Valley of the Northern Colorado Rocky Mountains, I was the middle child in a family of six kids with two hard-working, dedicated, and honest parents. I was raised on a cattle ranch, riding horses since early childhood. Today, I live in rural Montana, with my husband, Stan, a builder by trade. In the fall of 2001, I opened a publishing company, Raven Publishing, Inc. from which I've issued books from nine other authors, including two children under the new imprint, Nesting Tree Books. I've written more than a dozen books, and ten of them are published so far. I have also published three cross-curricular units designed for teaching from two of my novels and one by Jan Young. I've developed and present a fiction writing workshop and publishing seminars. I am always happy to visit schools and give public readings and lectures. Feel free to e-mail me at any time about my classes, my books, or my publishing company. www.janetmuirheadhill.com